I'm going to take a closer look at some of my favorite cards in the game. This week: two wurms! 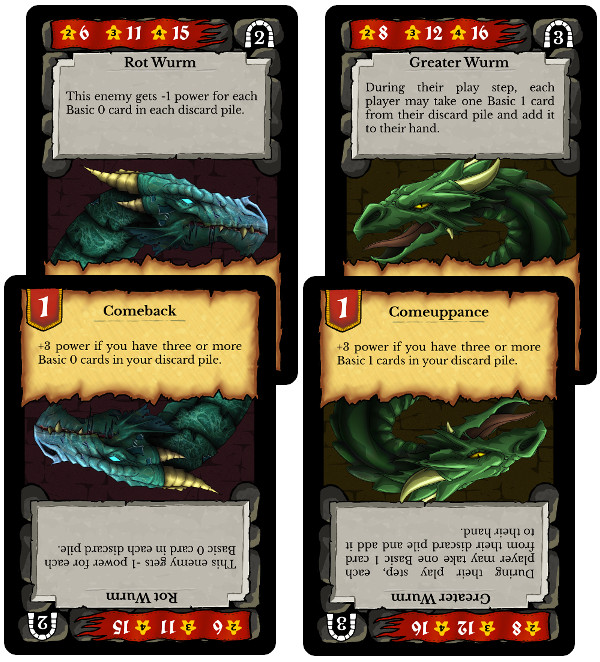 Every part of these two wurms feature similar mechanics and themes with slight differences. The fantastic art by Manolis Frangidis is the first thing you notice, with a comparable look for the two wurms, but the Greater Wurm is a bit more active and alive, while the Rot Wurm has a more undead color and look. Both wurms have high power numbers (the numbers up top in the red banner), but their special effects make it easier for the heroes by utilizing their discard piles in different ways. Note that the Rot Wurm gets weaker from Basic 0 cards in the discard piles, while the Greater Wurm interacts with Basic 1 cards in discard piles.

This distinction also returns in the loot part of the cards, named Comeback and Comeuppance. Both cards have a regular power of 1, but get increased to 4 when enough cards of a certain type are in your discard pile. (again, Basic 0 cards for the Rot Wurm and Basic 1 cards for the Greater Wurm) These are great examples of how the loot part is often thematically or mechanically tied to the enemy part of the card. Another great thing about Comeback and Comeuppance is that they make you think about your deck. Having a lot of Basic 0 cards in your deck is usually a bad thing, but it makes for a great Comeback.

Which wurm is your favorite?